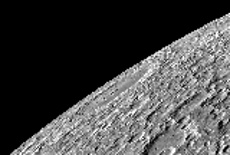 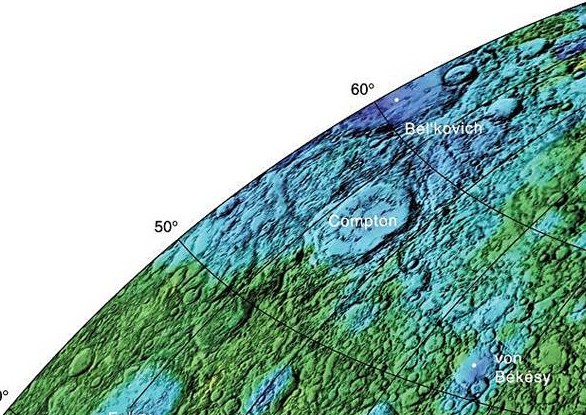 Larger version of region
This area above is not on the USGS Charts
Lunascan Quad Composite of Sections 77 ,78, 85, 86
LRO  Wide Angle Camera 16 in pdf

55.3_N_103.8_E
Compton is a prominent, 162-km, crater located on the lunar Far Side in the northern hemisphere. It lies to the east of Mare Humboldtianum (lunar Near Side and partially in Far Side), and southwest of the walled plain Schwarzschild (not visible). To the southeast of Compton is the heavily eroded crater Swann.  Further southeast, and near the section border, is Von Bekesy. Compton is roughly circular, with a wide, irregular outer rim that varies considerably in width. Parts of the inner wall have terraced steps that form wide shelves along the edge. Within the wall is a floor that has been resurfaced by lava flows some time in the past. This surface has a lower albedo than the surroundings, giving it a slightly darker hue. At the midpoint of the floor is a formation of mounts that comprise the central peak. This peak is surrounded by a semi-circular ring of hills that lie in the western half of the crater at a radius about half that of the inner edge of the rim. These mounts form jagged rises through the lava-covered surface and lie at irregular intervals from each other. The interior also contains a set of slender rilles within the ring of hills, primarily in the northwest part of the crater floor. Apart from a small, bowl-shaped craterlet near the eastern rim, the floor only contains a few tiny craterlets. (Credit: Most of the information used in this section feature description was obtained from wikipedia.org.  Section 77 and this directory was created by Fran Ridge and Ned Haskin of The Lunascan Project).